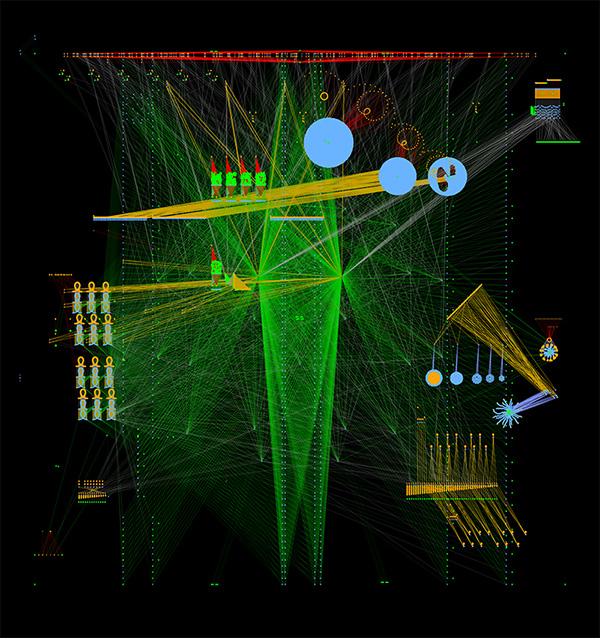 Musical and visual piece generated by GENESIS, the physics-based modeling and simulation software for 24, 8 or 4 loudspeakers

The original version of Helios is for 24 audio channels organized in a sound Dôme  version with a video, for the first configuration of the ACROE Hélicante Platform.

Hélicante is a real-time simulation station with the CORDIS-ANIMA© physical modeling technique and with a the modular force feedback keyboard Gamma©, including 12 haptic DOF.

Helios is composed of two simultaneous parts: a real-time part and a very complex part, calculated in non-real-time and played simultaneously with the previous during the performance.

The very complex non-real-time model includes approximately 130,000 CORDIS-ANIMA modules structured in about twenty virtual physical structures with specific properties. They simulate plates, membranes, large sets of interacting elementary particles, and so on. Some are very close to realistic structures, others, while remaining physically coherent, could not be built in reality.

The "live" part is built from subsets of the complex model, which allows a perfect fusion between the two worlds, live and time-deferred. The performance of the live part is done with the haptic keyboard and the performer has a total freedom of improvisation.