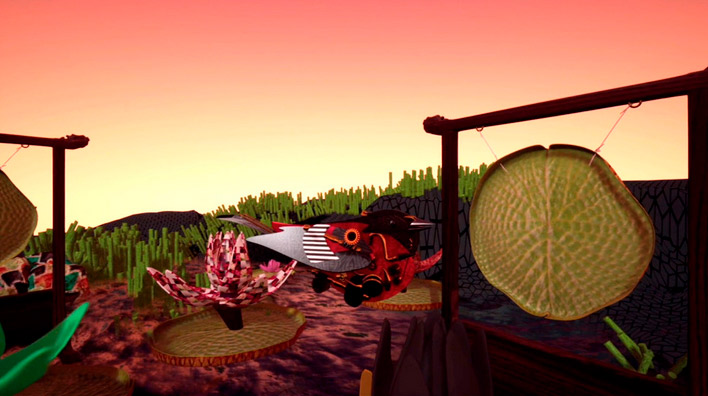 B is for bird

Birdsongs and nature have inspired humans and informed musical compositions and other art forms for centuries. This live game-audio composition navigates an ancient Chinese folktale: "Hu was a wise woman who, for many years, had taken care of the flowers and birds of an enchanted Chinese Botanical garden. During the day, it looked like ordinary places to wander about. But when the sun was down, earth and sky merged together into a purple glow, while Hu intoned a musical Pipa born from a butternut squash and played with synthetic birds in the orchards until dawn..." The outcome is a game-audio live performance composition emerging from the design of an interactive music system for mimicking birds' vocal anatomy preforming alongside a virtual pipa (a four-stringed Chinese plucked instrument). The playground consists of an evolutionary aural ecosystem entitled “B - is for Bird”, which drives sounds from a modular synthesizer, as the core audio-engine source for soundscaping a virtual garden. Such 3D ecosystem (which may have alternative themes). The singing meta-birds become A.I. actors on a game-engine server platform, which interact with the Pipa.