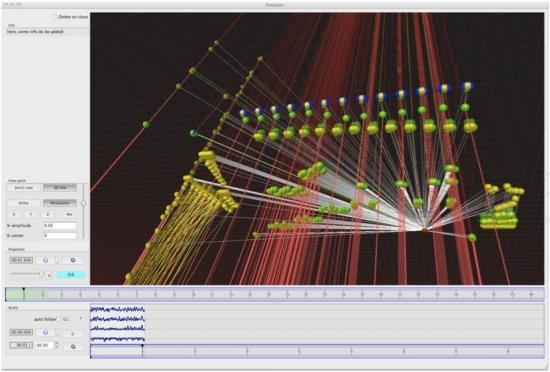 Physical Modelling and Simulation for Musicians

GENESIS is a modular software environment for musical creation that targets both sound synthesis and musical composition by means of physical modeling and simulation. Built over three decades of cutting edge research at ACROE and ICA, led by Claude Cadoz and his pioneering group in physically-based simulation for artistic creation, GENESIS enables everyone to benefit from the possibilities of physical modeling by creating his/her own models of sounding objects.

Thanks to its physical core principles, GENESIS naturally produces lively sounds, i.e. sounds that are rich, organic, and highly dynamic. Sounds produced by virtual objects have an expressive attack, and naturally evolve in intensity and timbre. Moreover, each sound produced by an object subtly differs from the others.

Beyond its expressivity, GENESIS also offers a new creative process. Users can design an infinite diversity of virtual instruments and sounds. They can also build virtual physical objects that interact with instruments in order to play them and control their behaviour. It is thus possible to generate sound events and musical phrases – possibly up to the whole structure of musical pieces. GENESIS is the first environment making possible to compose music entirely with physical modelling, opening a whole new world of musical ideas.