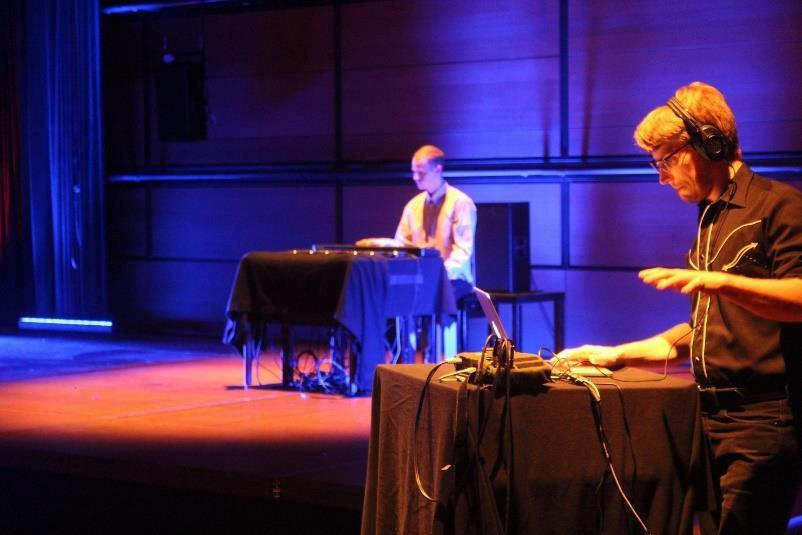 “Next City Sounds: Karlsruhe” presents a sonic portrait of the city of Karlsruhe and brings together the original approaches of four sound artists in an electroacoustic live performance. The work uses urban soundscape recordings that were recorded between 2015 and 2016 over a period of one year from seven listening stations distributed over the public space of Karlsruhe. The media artist Yannick Hofmann has recorded twelve thirty-second endless loop cassette tapes with urban soundscape recordings. On a MIDI keyboard, the twelve semitone steps of the octave are used as an interface, which allows the cassettes, played by twelve walkmen, to be combined in a musique-concrète-like way.
The artist and programmer Elizabeth Pich uses a modified version of the app “Code Chain” she developed: eight selected sounds can be edited in real-time with audio effects on three tablet computers.
Until August 2018, ZKM | Karlsruhe will show “Code Chain” as an independent installation work in the context of the exhibition “Open Codes”.
The US-American media artist and programmer Dan Wilcox has prepared an algorithm for filtering voice and other sound signals from urban sound recordings.
Marco Kempf, sound artist and creative coder, has condensed 24 hours of sound material – fittingly dating back to January 6, 2016 – into a thirty-minute electro-acoustic soundscape-composition for Ambisonics, which behaves like a kind of sound carpet