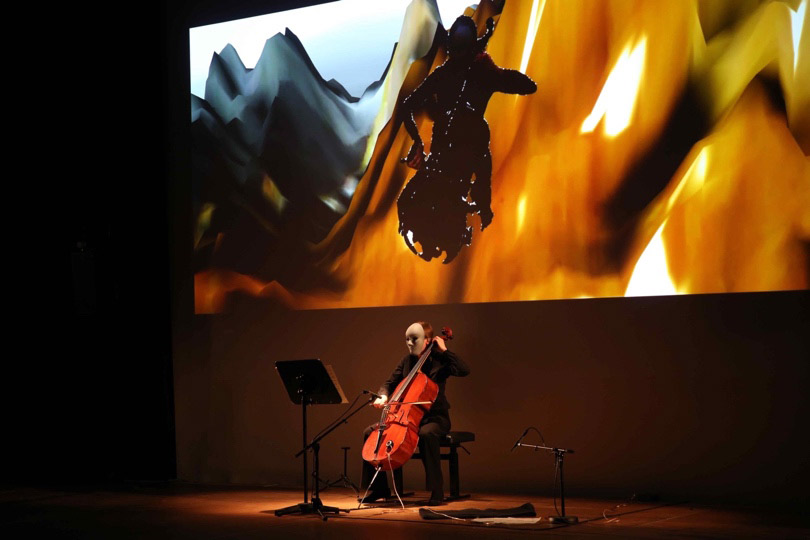 As part of his EASTN-DC artistic residency at ZKM the Japanese composer Takudo Fukuda created the mixed reality composition “Simulacra” for cello and electronics using volumetric capturing and holographic projections.

"Simulacra" describes the blurred boundaries between a real and a virtual performance in the context of an audiovisual performance and raises the socio-cultural question: What is it that creates the feeling of an "authentic" concert experience in the age of simulation?

Today's pop music concerts focus on simulating the mediated image of the singers rather than conveying their musicianship. This calls into question the role of the performers : Is their presence an embodiment of the performers' intention or an incarnation of a simulation?

Through the superimposition of and the interplay between the physically existent performing body and the volumetrically generated audiovisual projections, this piece aims to highlight the augmentation of gesture-sound coupling in performing actions as a new authenticity in concert performance today.

Fundamental to the realization of the piece is the collaboration with cellist Esther Saladin, who is scanned during her playing in order to reproduce the processed recordings in the concert space.

The virtualization of the cellist's playing in Takuto Fukuda's work is realized by using Volumetric Capturing (Evercoast). The process makes it possible to record, edit and store scenes in their three-dimensional reality. Volumetric capturing is an elaborate process that scans the instrumentalist from all sides using a large number of sensors distributed throughout the room and reassembles this data into a complete image.