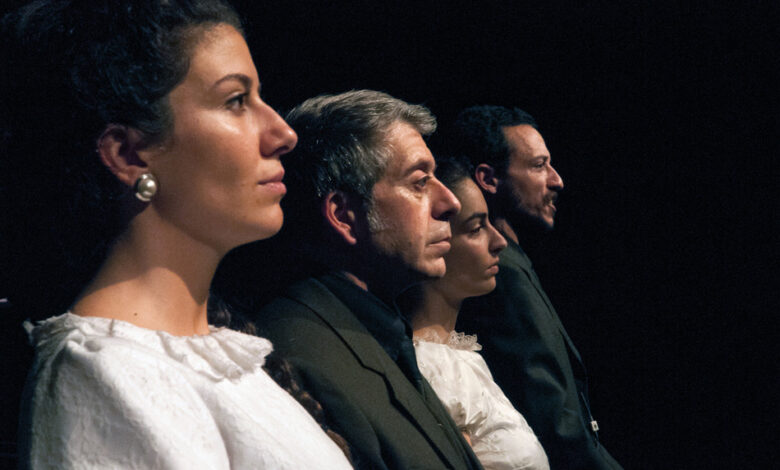 Music and text as music

"For a long time I have been trying to foster a state of "integration" between semantics and phonetics - music as text and text as music, perhaps by the multiple craft that characterizes my artistic activity, shared between the interpreter, the performer, the composer and the poet.

Addressing this prodigious text was long on the horizon, not only because of what it enunciates and its timelessness - and as such timeliness, but also because it projected a growing complicity of ideals and research with Fernando Mora Ramos, therefore the desirefor a creative partnership between Teatro da Rainha and Miso Music Portugal.

“O Discurso do Filho da Puta" offers us from the musical point of view a quasi-score, by the characteristics with sound properties of the poetic writing of Alberto Pimenta, and therefore contains, from the outset, the elements conducive to a distribution by several voices, of a character simultaneously one and multiple.

On the other hand, it is ritual and conforms ironically, common practices to concerts of classical music, both for the exacerbated protocol, as for the symbolic charge, but also for the rigor and depuration of the gesture, the poetic gesture turned musical gesture.

The " Discurso " welcomes thus a quartet of actors, as if a quartet of musicians were, quartet of vocal cords therefore, to give voice to a choral speech in which the word is made music and is organized in timbres, rhythms, harmonies, melodies; sometimes in unison, or in homophony, or in heterophony, or in polyphony, or in counterpoint.

Thus more than being music added to the poetic text of Alberto Pimenta, the music here is mainly the recognition and unveiling of the music that the text already contains, giving to hear differently, giving to hear again; and assuming the word in its full vocality; and the spoken voice in its extraordinary possibilities of multiple, sonorous and expressive emission."