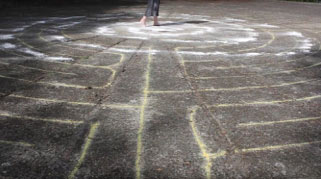 Live performance is experienced in the present in front of the physical presence of an audience, as Peggy Phelan puts it: ‘Performance’s only life is in the present […] Performance implicates the real through the presence of living bodies’ (Phelan 1993, 146-148). Video and audio recordings capture a moment, an action, a voice, a body in time and space, and they can be repeated and re-experienced via the projection of the material. However, the deployment of digital technology in performance can challenge the temporality of performance, as well as its spatiality, and can generate meanings that expand audience experience beyond the performance space and the live act.

This paper examines the encounter between live performance and digital technology, especially through video and audio recordings and projections. I focus on the multidisciplinary project Spirals (2013-ongoing) by PartSuspended, which embraces a variety of art forms (poetry, video, sound, walking, performance interventions, live art, collage, workshops), and has been filmed and performed in a variety of settings and cities in Europe, engaging female artists and poets.

The project Spirals seeks to articulate the female experience of time, movement, memory, nature and sense of belonging in a poetic and innovative way. It crosses geographical borders and unites European female voices in an exchange of languages, cultures, personal narratives and modes of expression. It employs leftover spaces in Europe where interventions and spatial performative gestures based on the symbol of the spiral are filmed; work has been filmed in London, Broadstairs, Barcelona, Belgrade, Coventry, Agost, Devon and Athens. The project consists of a series of performances, poetry, exhibitions, online incarnations, workshops, videography, recorded material, music and movement; therefore, different aspects can be analysed in diverse ways. For the purposes of this paper, I focus on the live performances of the project, and I examine the ways in which the deployment of video-poems in live performance invite audience to experience the multiplicity of time and spaces.

The video projections echo actions happening live on stage, whilst the spirals shaped in live performance reflect the spirals created in other city-spaces that become present via video projections. Through this process of reflection, the experience of space and time is multiplied. Considering Michel Foucault’s ‘heterotopia’ as ‘counter-sites’, ‘a kind of effectively enacted utopia in which the real sites, all the other real sites that can be found within the culture, are simultaneously represented, contested, and inverted’ (Foucault 1986: 24), I argue that the experience of the space produced by the intersection of live act and recorded material create a ‘counter-site’ in which spaces and time exist simultaneously and their traces act as a reminder or the world interconnectedness and the cyclical movement of time and space. The interaction of live performance and audio-visual material generate a creative intervention and invite audience to rethink and reimagine their engagement with spaces, time, texts otherwise, and opens a common space for dialogue and sharing.

The spiral is connected with time and space, challenging the idea of productive-linear time and opposing values that often govern contemporary human action and interaction. The symbol of the spiral can be found in nature and in countless ancient and contemporary artefacts, often representing evolution, transformation, rebirth, growth, lifecycles, fertility, cyclical forces and patterns of nature. It can also make reference to a movement from internal concepts and the inner self to the outer world and vice-versa. The spiral acts as a sign of becoming, transforming and awareness. Through the symbol of spiral, the project emphasises how opposite ‘lands’ meet; how curves challenge the straight lines and ordered environment; how time is linked to cyclical movement of exploration, migration, discovery, path and nature. Through the use of voice, sound, poetry, movement and recorded material, the project seeks to re-discover the accidental, the contingent and the improvisatory. The project’s form and qualities (dynamic, non-linear, open ended) as well as the engagement with digital technologies produce space beyond the static and well-defined systems that endeavour to organise space. An open and ‘unfinished’ space (Massey 2005: 107) that offers a great potential for imagining and acting otherwise. A space that is dynamic and fluid, open to accidental discoveries, and which produces and is produced by a multiplicity of trajectories.