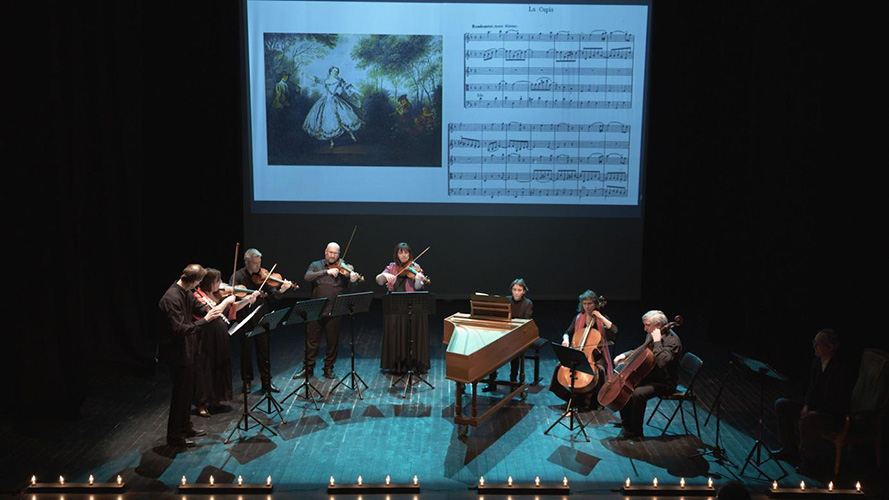 "Le tombeau retrouvé de Rameau" is a musical piece devoted to the music of Jean-Philippe Rameau, by Gilles Colliard and "the Hausmusik Collective".

Since the work "Le tombeau retrouvé de Rameau" was created at the Cité de la Musique in Romans, whose team is working - with the complicity of Baptiste Pierre and in partnership with ACROE - on music creation in multicast, the idea is for us come to realize an ambisonic version, which would superpose to this written musical creation, itself connected to a composer of the past, a space creation (realized by Baptiste Pierre) making travel through the room the different parts of the musicians ...

This project is currently in an experimental phase, having been recorded from a recording in "live" and not in studio, but we hope to have the opportunity to realize soon a more accomplished version ...

The Hausmusik Collective
Created in 2017, consisting of eight professional musicians and a narrator, the Hausmusik Collective aims to inspire and fund the writing of innovative musical compositions related to our musical heritage, demanding but pleasant to hear and to play, and accessible to small groups of amateur musicians of good level. This, in order to help the written musical creation to reconnect with the public and with the musicians, as an alternative to a contemporary music sometimes considered as too abstract, too difficult or too austere. To reconnect also with its past, because the artistic creation needs to live and to move, like the young plant, of roots which nourish it, without constraining its freedom nor being resigned to a neoclassical approach: it is here simply to rehabilitate the notion of musical pleasure and to rework to a continuity of the present with the past.
The first program of the collective "the Hausmusik Collective" was devoted to the music of Jean-Philippe Rameau, through large extracts of his "Sextuor Concerts", moving and learned miniature symphonies that can be played with friends, in the presence of the composer played by the reciter André Bouvier.