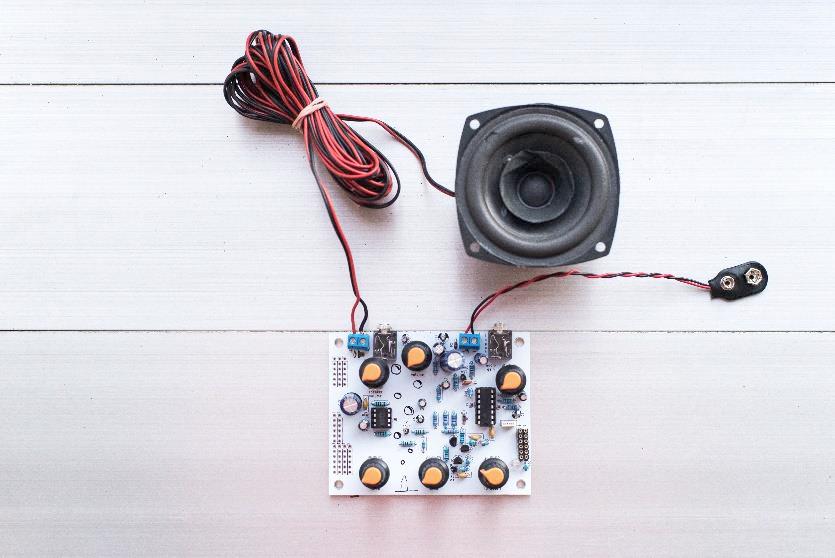 Participants will assemble an electroacoustic instrument and tool for a physical manipulation of sound Soda. Soda is a semi-modular instrument with several inputs and outputs, which enable intervention into the circuit’s signal path. This signal starts with a jack input, which can be used for plugging a contact microphone, a synth, a guitar magnet and so forth. In the circuit’s output phase the signal physically manifests itself in the form of a line output and an internal power amplifier which powers the speaker.

Soda is a semi-modular electroacoustic instrument with several inputs and outputs, which enable interfacing with other audio devices (such as synths, rhythm machines, guitar pedals, etc.). It may be used either as a standalone synth/signal processor or trigger and CV generator.
Signal path starts with a jack input, which can be used for connecting an external signal. Its waveform may then be amplified, filtered and fed into the voltage-controlled oscillator (VCO), which outputs a frequency modulated ramp waveform signal, ranging from harsh noise to pulsating rhytmic bursts, reminiscent of the external signals characteristics (timbre and amplitude).
The circuit has two separate audio outputs - a 3.5mm jack line output and an internal amplifier intended for powering the speaker, which encourage an exploration of various feedback possibilities.
During the workshop participants will gain basic knowledge on electronics and soldering, assemble Soda kit and get familiar with its possible uses. Bring your DIY synths!