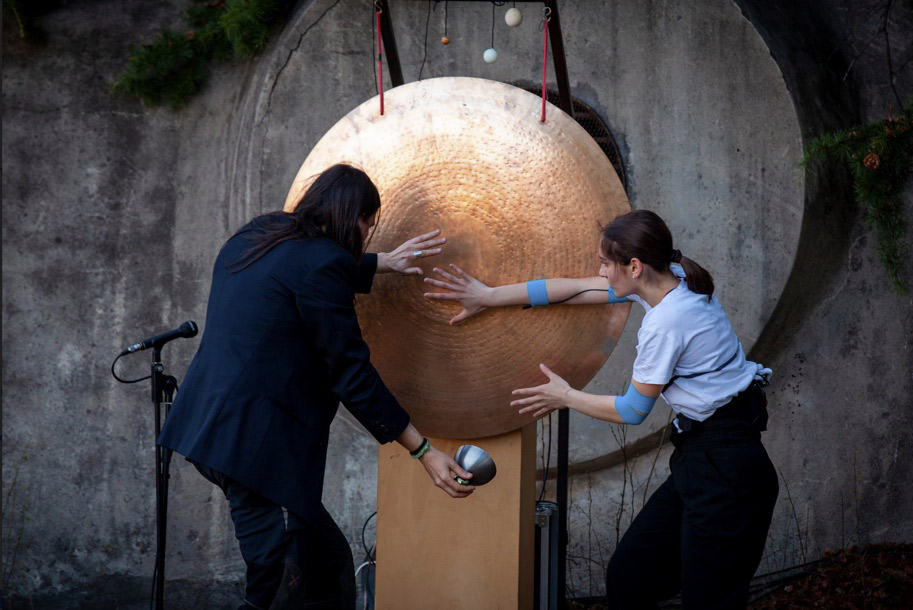 Two of the main themes of the artistic career of Alessandro Sciaraffa, an internationally active Turin-born, are the primitive sound of the gong and the research on acoustic resonance phenomena. Totem Orchestral not only combines these themes with each other, but creatively intertwines them with the experiments of the METS-Conservatorio di Cuneo in the field of sound and new technologies, often with the complicity of other arts.
Alessandro Sciaraffa graduated in Architecture at the Turin Polytechnic, studied at the Banna Foundation and graduated from the Domus Academy in Milan. Winner of numerous national and international awards including the Cairo Award in 2012. He exhibited at the Merz Foundation in Turin, GAM Turin, Sandretto Re Rebaudengo Foundation, Persano Gallery in Turin, Oceanographic Museum of Monaco Monte-Carlo, Gallerie Italienne in Paris, Galerie Mazzoli in Berlin and in many other prestigious venues.

In this way not only the position of the dancer with respect to the gong influences the latter’s resonances, but also the movements of the dancer, thanks to the sensors, affects the signal that excites the gong putting it in resonance.
After the performance a room in the Cantore ex-barracks hosted Sciaraffa’s installation, renamed TOTEM STELLA for the occasion, in order to let the visitors interact with it during the whole duration of the festival.