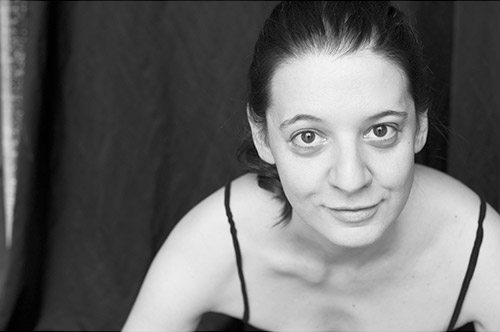 Esthir Lemi focuses on documentation of the artistic process and reality as well as on the complementarity of art forms, and how technology interferes with its schemes. Her research, based on haptics, is aimed at a broad public in order to create an easily accessible innovative platform for both artist/engineers and the audience.

She has been awarded with several scholarships. She has been chosen to represent her country at numerous events and international festivals (Bjcem 2003 and 2005, European Capital City 2006, Athens Biennial 2011, NIME12, Innovation in Music II 2014, SMC2018 (audience award), Escales 2019 Galleries Lafayette Marseille) both as an artist and composer, furthering her research concerning the perception of complementary forms for a wide audience. She conducted part of her research as artist- in-residence at Medialogy Department at Aalborg University in 2014 (Haptic Diary project).

She continues her collaboration with Medialogy lab for various projects (Parenthetical Window 2015-17, Through the Looking Sound 2019) as an artist testing the labs applications for art installations.