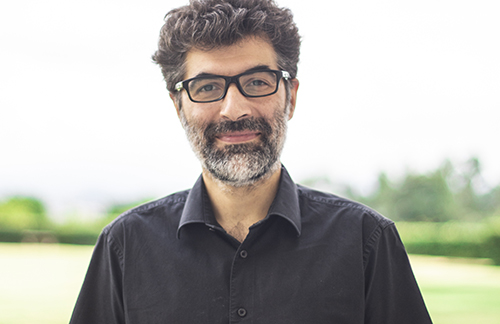 Pedro M. Santos
Pedro M. Santos
Pedro M. Santos holds a Master’s degree in Composition (Royal Conservatory of The Hague, The Netherlands, 2005) and a Degree in Composition (School of Music and Performing Arts, Porto, 2002).
Since 1996, he has taught in several schools of specialized artistic and professional music education, having also performed pedagogical coordination functions. His professional activity encompasses teaching, composition, research and music criticism. He is currently a member of the Artistic School of the Conservatory of Music Calouste Gulbenkian de Aveiro as a professor of Analysis and Composition Techniques and collaborates as a Guest Assistant Professor in the Degree in Composition at the Escola Superior de Música e Artes do Espetáculo of the Polytechnic Institute of Porto.
As a composer, he created works for various vocal and instrumental formations, including: “Três Cantigas de Arouca” for a cappella choir (album “Despiques”, S. João da Madeira Chamber Choir, 2008), “Tríptico” for symphony orchestra (Academia e Escola Profissional de Música de Viana do Castelo, 2009), “The Arlequim’s Dream” for instrumental ensemble (Cistermúsica, 2011), “Sketch Fragment” for string quartet (Harmos Festival, 2017), “Song of the monkeys of imitation” for children’s choir and piano (Musichildren’17), “Three Autumnal Pieces” for solo piano (“Repertório para Pianistas – Compositores Portugueses”, AvA Musical Editions, 2018) and “On a midday at the end of Spring”, for choir and wind orchestra (Municipal Year of Children in the municipality of Lousada, 2018). He has also participated in multidisciplinary projects, including his collaboration as a composer in the show “Kinski” by the Ensemble Portingaloise (Cycle Danses Abritées # 2 – La Pépinière baroque by Béatrice Massin, 2017).
As a researcher, he published some scientific texts on contemporary repertoire for children’s choirs, highlighting the chapter “The interaction choir-orchestra in «Ljus av ljus» by Karin Rehnqvist” from the book “Choral Singing: Histories and Practices” (Cambridge Scholars Publishing, 2014). ).
He collaborated with the Público newspaper, as a classical music critic.