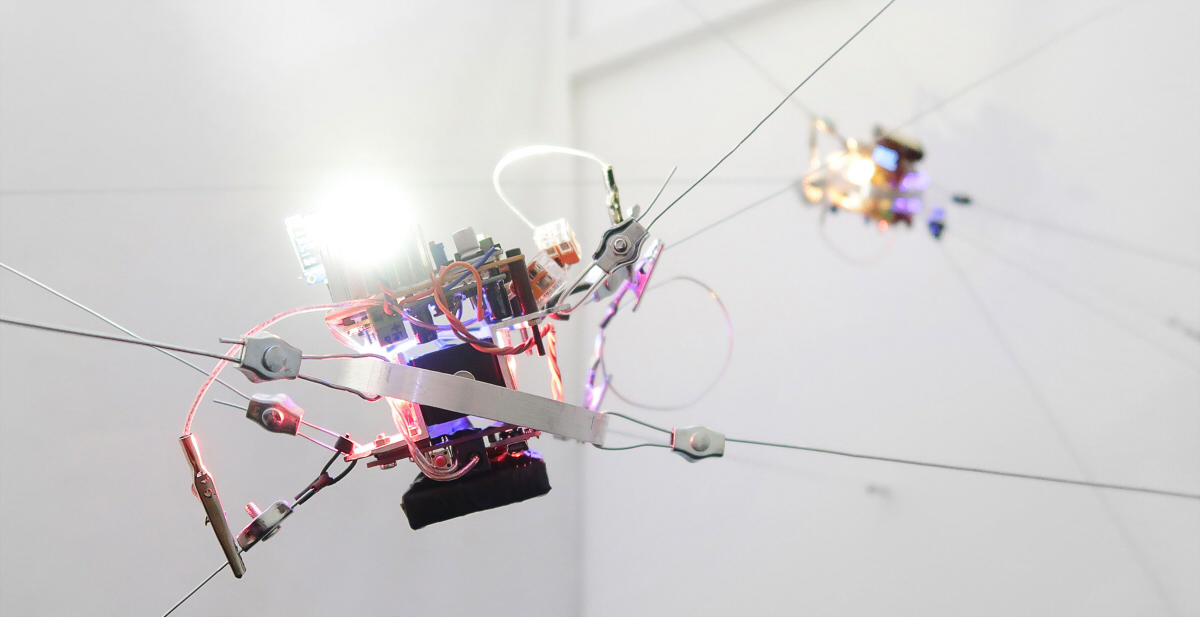 Muons are high-energy elementary particles forming in the atmosphere's upper layers during collisions of cosmic rays from space. They pass through our bodies, large natural masses, and human infrastructure at any given time, disintegrating mostly in the Earth's depths.

These imperceptible particles are addressed and materialised by the light-sound installation Cosmic Rain by the artist Tilen Sepič. The installation consists of seven detector-signal units that are spread across the gallery and simultaneously powered by an electrified steel mesh.

Each individual element is comprised of a scintillation detector designed in accordance with the Cosmic Watch open-access and open-source muon detector. As the muon passes through the scintillator, a weak light pulse is generated which is amplified by a silicon photomultiplier and then converted into an electrical signal. The built-in microcontroller detects the said signal, triggering a bright flash and a blow of the electromagnetic actuator against the mesh, emulating the sound of strings.

The distinctly material representation of cosmic particles in the form of light and sound stimuli grants the spectator a sensual experience of physical and cosmic events that are otherwise unfolding everywhere around us yet remain inaccessible to our senses. The functionalist and engineeringly-precise artistic gesture is spreading out the detector and signal network in the space, which exposes the mass of muons' continuous collisions that are actually already present in every gallery as a kind of invisible cosmic constant of "from world separated" white and black cubes.