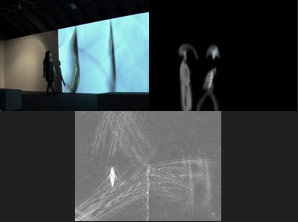 Video associated to a paper and a talk written for the EASTN-DC DCAC festival organized by the Ionian University in 2020.

In this video, Annie Luciani proposes an interpretation of the concept of “Simulated Matter”, she developped in her research work, under the lighting of the philosophic concept of “Heteropia” introduced by the French philosopher Michel Foucault in social spaces and by extending this concept to that of Dynamic Heterotopia.

Designed and created by Kevin Sillam, scientific, PhD researcher during his doctoral internship and Melanie Lesbats, young artist during her internship, working at ACROE with Annie Luciani.

In “EtOndes..Particules”, we interact with a simulated physical surface, causing propagations playing like an echo of the movement of his body, felt by a camera. The simulated physical surface reacts to the body gestures by creating multiple and varied dynamic echoes more or less transformed. The process can be collective: several people can interact simultaneously with the same simulated world. Behaviors such as multiple echoes of one action can emerge generating multiple ghost echoes.

Designed and created by Kevin Sillam, scientific PhD researcher during his doctoral internship and Noé Guirand, young composer during his studies at Music Conservatory in Grenoble.

In "Somnambule", a pianist interacts through his musical gesture with a physically-based puppet simulation. The puppet dynamically engraves the simulated physical surface, creating dynamic traces as in more or less fluid water. The dynamic trace of the puppet also controls another - its ghosts - similar but different from the first one, also engraving the same simulated material. Such a cascade of dynamic traces of the pianistic gesture aims to represent a dream of dreams as successive echoes of an initial gesture.

Created and designed by Annie Luciani, who designed the software “Dynamic Engraving”.

In “Wanderings”, the simulated physically-based surface presents several zones, with physical parameters just a little bit different. Thus, at each frontier, the fluid propagation is more or less disrupted. By managing the physical parameters on the frontiers, echo and propagation are able to cross more or less the frontier, from total echo refection to waves propagation, and between both cases, we obtain a large panel transformed echoes, propagations, ephemeral or remanent absorbsions, etc.