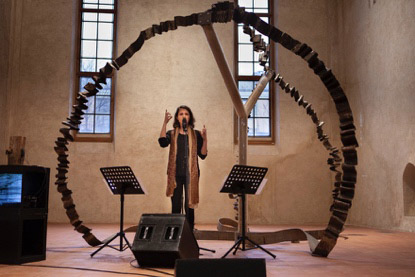 “La presenza sonora del vuoto”(the sound presence of the void) is the ambitious attempt by METS-Conservatory of Cuneo to expand with sounds the sculptures of Giuseppe Penone in the exhibition "Incidenze del vuoto” (incidences of the void), organized by the CRC Foundation and the Castello di Rivoli Contemporary Art Museum at the Monumental Complex of S. Francesco in Cuneo.

Electronic compositions inspired by Penone's exhibited works have been appositely created for this event by the METS student composers Marco Barberis, Riccardo D’Ambrosio, Simone Giordano, Cristina Mercuri, Debora Picasso and Taylan Sakin, with the artistic coordination of Prof. Gianluca Verlingieri. In some of their works, Penone's poetics suggested combining electronics with voice and other musical instruments entrusted to students and former students of the Ghedini Conservatory: the singer Arianna Cibonfa, the flutists Ilaria Bellone and Elena Sandrone, the percussionist Michele Cera (which transformed a chestnut tree from the Piedmontese Grana Valley into a surprising sound source).

Also important was the role of the METS sound engineering students Francesco Cotta, Massimo Deidda, Michele Pautard and Diego Pelissero, who, under the guidance of Prof. Fabrizio Barale and in collaboration with the composers, took care of the technical set-up of the METS multichannel audio system. The speakers have been arranged following the location of the main sculptures of the exhibition: “Matrix”, a sculpture which fills the central nave as the backbone of a hypothetical human body, and “Sutura”, which, positioned in the apse, represents the skull of that metaphorical human body.