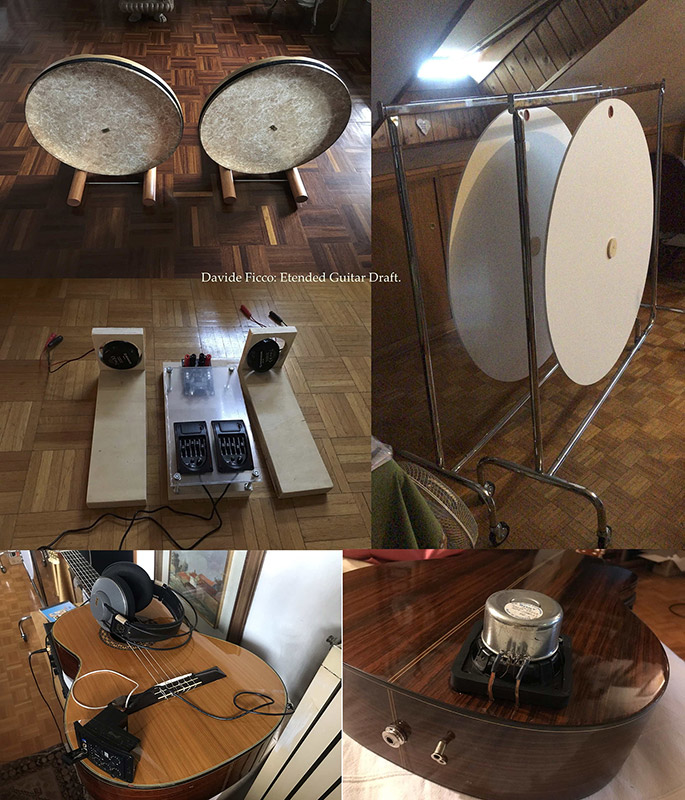 The Extended guitar is a hybrid musical instrument developed by Davide Ficco.

It is a classical guitar equipped with piezoelectric hexaphonic and stereophonic microphones. Such equipped guitar controls two distinct stereo amplification lines: the first which - by means of vibrating transducers - solicits two long springs, each connected to a Persian daf (flat and wide drum); the second line which, also by means of a stereophonic amplification, drives two vibrating transducers.

This configuration allows to generate sounds that spread simultaneously with respect to the natural sound of the instrument: the two dafs producing a natural delay with respect to the emission of the guitar and the circular panels conveying sounds that an also be processed electronically (as Marco Barberis experimentally did), with the specific characteristic of spreading the sound not as point-like source, but extended as a dipole, enveloping the performer in the center of the devices. Thus, it  enriches this instrument, which I define as extended guitar.

Extended Guitar should be presented by the artist with the aim to show and discuss features, possibilities, limits and practical behavior of the instrument and trigger future developments and collaborations.