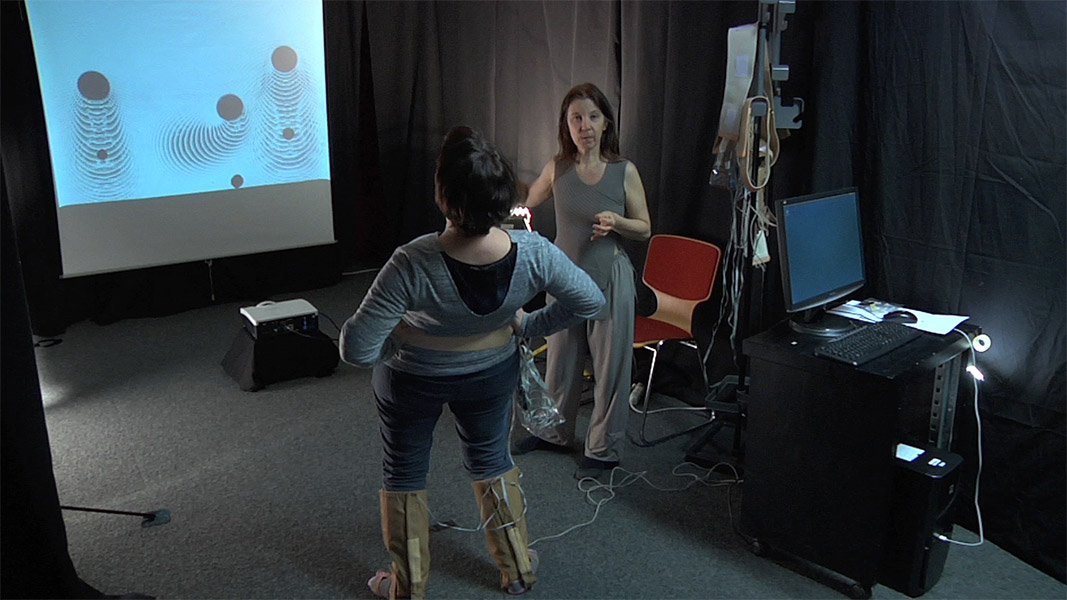 Cynergia combines dance and the interactive computer animation in real time. The Cynergia framework focuses on the kinesthetic perception inviting the people to be aware of his body patterns.

The aim of Cynergia is to implement a sensitive relationship between the proprio-kinesthetic perceptions that the dancer has of his own body, and visual computer – generated representations. Such representations do not fall easily within the framework of computer image synthesis that is more morphologically realistic and not sufficiently focuses on the notions of forces, energy, proprioception or kinesthesia. A few years ago, the meeting between Benedicte Adessi, a visual artist and performer, and Annie Luciani opened up new ways of technological and artistic research in an attempt to answer to the question:

How can the movements of a dancing body be made more intelligible by the viewer, especially by associating body perception and adequate visual representation?

The system developed for Cynergia is composed of three elements: force sensors placed under the feet, physical models designed with MIMESIS that are controlled by these force sensors, and a visual trace of movements generated by these models also obtained by physical model. Sensors acquire foot pressure on the ground. The physical model made with MIMESIS plays as a virtual body-metaphor in terms of masses and interactions of the dancer's feelings. The dancer creates his own models. Benedict Adessi made several. It is also the dancer — here Benedicte Adessi — who develops the physical models of visualization.

By this way, the dancer is able to externalize his inner body representation, that is to say what it happens inside his body. It allows anyone who plays interactive slippers in front of the visual echo showing the forces, to become aware of his body pattern. It focuses on forces and energy rather than spatial body movements: how to press, how to transfer weight without apparent motions, etc. So it's more about intensity than spatiality.