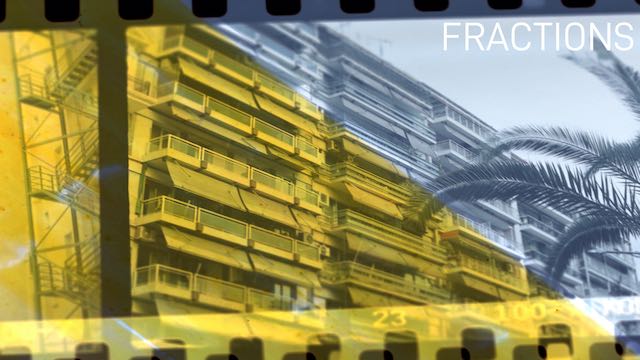 "Fractions" aspires to create a subtle immersive audiovisual experience through a dialogue between fragments of music and fragments of filmed spaces. It takes the shape of an experimental Dj - Vj performance where photographic slides, photographs, audio recordings and music are interwoven and entangled. The crossmodal interactions between image and sound to construct an environment that suggests the elimination of time by passing any given narrative and enhances a spatial impression.
The visual content of the piece comes from an archive of mainly spaces documented during a long period of exploration by two members of the artistic team. Clips and snippets of visual material create a composition that highlights architectural and perceptual qualities of these spaces. Equally, the sonic content derives mainly from small fragments or longer motifs from well-known pieces, re-appropriated and used in an audiovisual context which aims to evoke the perception of silence and emptiness and avoids any dramatic consideration. Recorded music from a wide range of repertoire which includes western classical music, contemporary music, electronica, electroacoustic music and soundscape compositions is mixed and processed together with various types of field recordings and film dialogues.
The performance intends to recompose these audiovisual fragments and re-contextualize imaginative “locations”. Within the continuous live editing, the unsettling film experience never really takes a complete form. Overall, the artists seek to construct an imaginary environment, a virtual reality where fractions of space/environment and sound/music fuse together.