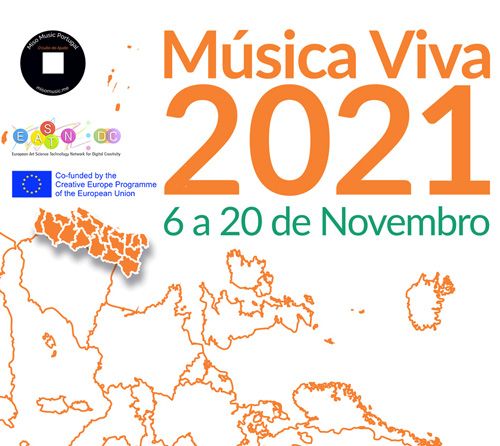 The Música Viva Festival is an integrated initiative of Miso Music Portugal to promote and disseminate contemporary musical creation, especially dedicated to Portuguese composers and performers and the relationship between music and technology.

The Música Viva Festival is an integrated initiative of Miso Music Portugal to promote and disseminate contemporary musical creation, especially dedicated to Portuguese composers and performers and the relationship between music and technology. The Música Viva Festival completes its 27th edition in 2021; showing the vitality of musical creation in Portugal, in a clear confrontation of ideas and aesthetics, the Festival provides new possibilities for experimentation, fostering new spaces of expression and approximation with the public, multiplying encounters and giving way to emerging values that point to new ways.

RAVE SÉANCE is an interactive live-installation.

The project creates an audiovisual environment that fuses aspects of Rave culture and esoteric séances. By combining aspects of techno music – a form of music characterized by electronic sound production and mechanical repetition – with pseudo spiritistic practices, it thematizes the seemingly contradictory coupling of scientific discovery and magic, which has existed since discoveries in the field of electricity have entered popular culture in the 18th Century.

The performance is designed as a fictitious invocation of a techno-ghost that exhibits its own ‘will’ and therefore influences the performance in a variety of ways. Key components are design by using principles of algorithmic and generative composition which also includes live-input from audience members, as well as Artificial Intelligence (RNN).

Five small tables are arranged in a circular fashion with a diameter of approximately 5 meters. One of the tables is used by the performer and "master of ceremony". The entire equipment for the performance is positioned on thistable.

The other 4 tables offer altogether 12 seats for the audience (3 per table).

In the middle of this circular arrangement laser projections are displayed on the floor, coming vertically from the ceiling.

Three large buttons are built in each table, which will offer the audience the possibility to influence theperformance. The tables are also equipped with solenoids and shaker-motors, which will be turned on at keymoments during the performances. In those moments the tables will start to knock, shake and move - akin to atable-turning séance.

A total of 7 rave hymns are heard during the complete performance. These hymns are inspired by female chants in a style that was typical for rave music in the 90s. This style of singing evoked a sense of other-worldliness,often combined with esoteric imageries.

In this project, all hymns are produced with the advanced voice synthesis program Vocaloid and the texts havebeen derived from esoteric oracles based on animal spirits.

The synthetic female voice here is a representation of the ghost that is evoked through the Rave. I amdeliberately giving in to the gender clishée. While the typically female voice of rave hymns evokes a sense ofephemeral eroticism, the position of the ghost in this project is a place of empowerment.

A response to the Hymn will take place as a live generated pseudo Rave, which is generated algorithmically witha modular synthesizer setup. The synthesizer components contain modules that are emulations of the RolandTR909 drum machine, that defined the sound of techno beats in the 80s and 90s. In contrast to original techno music, these pseudo raves have constant tempo instabilities. The severity of the instabilities depend on whether the performer selected a particular rave that functions as a response to the hymn that was played just beforehand.

The laser produces shapes based on forms that consist of 5 points, which are then multiplied and distorted in avariety of ways. During the hymns (see 2.2.1) the individual words of the sung text are also displayed.

While the laser projection is confined to a relatively small space in the center of the table arrangement, there willalso be a light design that is going to illuminate the space in different colors and intensities, depending on the state ofthe performance.

Physical modelling for sound synthesis and musical composition with GENESIS-IV

Ø General modeling techniques and methods within GENESIS and CORDIS-ANIMA

Ø Techniques and methods of sound spatialization in GENESIS

Short Description
GENESIS-IV is the very last version of the software environment developed by Claude Cadoz & Nicolas Castagné in ACROE, allowing to create interactively and with elegant ergonomics physical models according to the CORDIS-ANIMA formalisme (ACROE). Many features are dedicated to the specific level of sound creation. They are extended by composition procedures (integrated into complex models) which allow the creation of high level musical structures. In addition, still within the framework of CORDIS-ANIMA, GENESIS allows the development of specific models offering different modes of diffusion of multichannel sound tracks to any set of loudspeakers, for example with an Acousmonium or a Sound-Dome. And finally, several modeling techniques developed by C. Cadoz make it possible to emulate gestural force feedback devices when they are not accessible and thus to create and study “offline” models intended to be piloted “ in-line ” by such systems (using actually force feedback systems). The workshop will present these features and functionalities and allow them to be studied and tested through numerous exercises and examples.

In 1976, he founded ACROE with Annie Luciani and Jean-Loup Florens, to conduct interdisciplinary research in Computer Arts, Informatics and Human-Machine interaction technologies. He has developed pioneering research on force feedback devices, physical modeling and real-time simulation for music and multisensory computing. He developed the fundamental concepts of modular physical modeling for music, ranging from sound creation to musical composition. Author of numerous publications including a popular science book "Virtual Realities". (Flammarion, 1994), he trained more than 400 master's level students and supervised 35 doctoral theses. He is the author of 2 international patents on actuator-sensor technology for haptic devices and electro-dynamic piano. He has produced several works with ACROE technologies: ESQUISSES (with A. Luciani & J-L. Florens - 1993), pico..TERA (2001), Gaea (2007), Hélios (2015), Quetzalcoatl (2018 - 2019 - 2021).

DESCRIPTION
Game elements and their Artistic Potential for Audiovisual Works

The inclusion of elements from games and especially from computer games in audiovisual works offers many artistic opportunities but also challenges. Between 2016 and 2021 Marko Ciciliani has run an artistic research project at the IEM, the Institute of Electronic Music and Acoustics of the University of Music and Performing Arts Graz where, in collaboration with performer and artistic researcher Barbara Lüneburg and musicologist Andreas Pirchner, he has investigated various possibilities for utilizing elements from games in the context of performance based audiovisual works. The project is titled GAPPP, which stands for‘Gamified Audiovisual Performance and Performance Practice’ (http://gappp.net).

Since the start of the project, altogether 12 new works have been created that are exemplifying and investigating the inclusion of particular game elements in the context of interdisciplinary works that are staged in concert settings or as live installations. Five of them have been composed by Marko Ciciliani, the others by various artists that have been invited to the project as guests.

In the first part of this workshop, Marko Ciciliani will speak about the triangular research design of this project, which separatelyinvestigates (1) the artistic intentions and expectations of the artists/composers, (2) the experience of the performers that put them onstage, and (3) the perception of the audience. Various findings that resulted from the research project will be presented, along side several examples of artistic works.

In the second part of the workshop Ciciliani will present in greater depth how he explored interactive 3D environments for musical purposes while approaching the design of virtual landscapes as representations of musical scores and instruments. From this exploration of the interplay of physical and virtual spaces, artistic works will be discussed that manifest as a hybrid between installation and performance.

This workshop is suitable for anyone generally interested in artistic research and new media art, and more specifically inaudiovisual composition, computer music, or computer games. A very basic understanding of these art forms is presupposed but no specialised knowledge is required.

(Techniques for Interactive Performance of Music and Dance with Sensor

data transmitted over the internet live)

DESCRIPTION
The workshop shows how to create augmented telematic performances involving live coding, instrumetal performance and dance, and transmitting data from sensors as well as sound via the internet. We experiment with the creation of sound and images through movements tracked with wireless sensors. Data from sensors worn by the dancers are transmitted to two computer programs, which controls the generation of sound and image in real time. The aim of this work is to explore how dancers can use simple patterns of sound and image and basic interaction rules to create a sense of dialogue, and how several performers can manipulate the sound generation processes b intervening both in the stream of data and in the stream of audio signals transmitted. This opens the possibilities for a very tightly knit ensemble where coding and embodied performance are intimately linked. For sharing of code we use OSCGroups by Ross Bencina with a custom library in SuperCollider by Iannis Zannos. For sound streaming we use sonobus.

Iannis Zannos works on Computer Music and interactive media arts at the Department of Audiovisual Arts. Currently his research focusses environmental issues as well as problems of multiculturality are reflected in media-art terms, in particular collaborative and performance practices with gestural devices employing telematic technologies.

The Música Viva Festival completes its 27th edition in 2021; showing the vitality of musical creation in Portugal, in a clear confrontation of ideas and aesthetics, the Festival provides new possibilities for experimentation, fostering new spaces of expression and approximation with the public, multiplying encounters and giving way to emerging values that point to new ways.