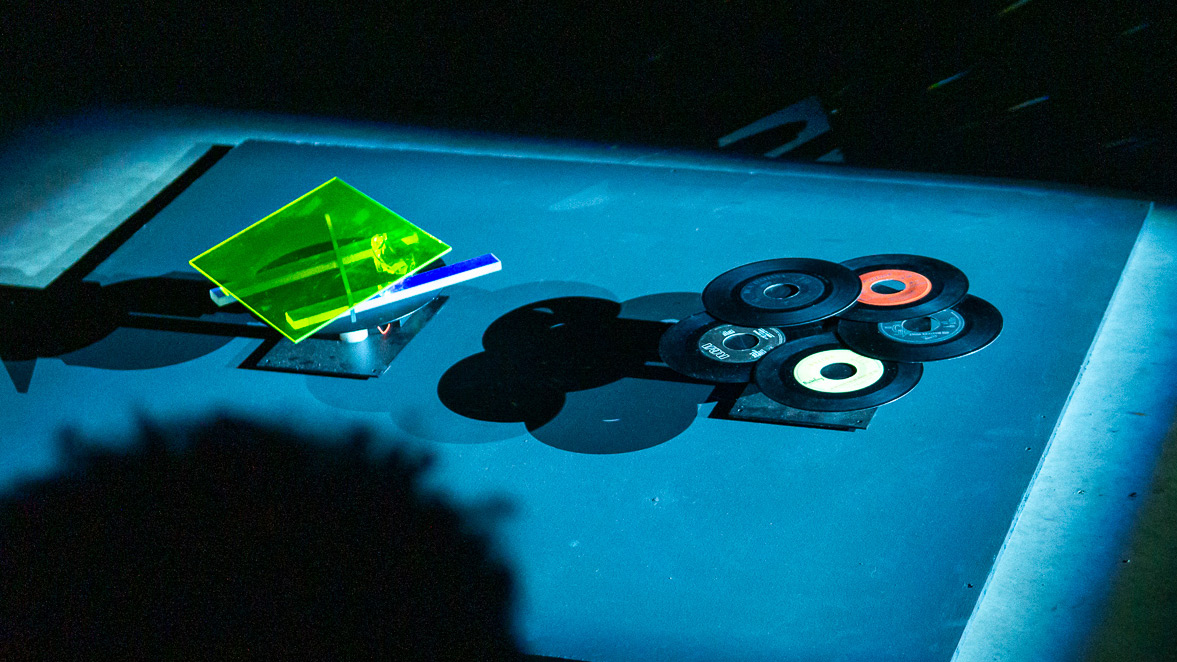 Object-Oriented Object is a live performance on analogue devices in which three turntables and a set of projectors are manipulated in real time.

On the turntables, equipped with a laser that functions as a scanning head and whose signal is interpreted by a modular synthesizer, objects are played. The actions are visible and simple. Punctual light sources, of different powers, omni-directional or focused, static or mobile, are played simultaneously, revealing the objects by making them exist at the dimension of the space.

Starting from objects whose attributes (colour, shape, geometry ...) can be immediately deciphered with the eyes, it is their setting in motion that gives rise to a temporality, a rhythm. This rhythm is external to them, the objects are not the source but the obstacle, the resistance, and thus confront the sound and visual phenomena they generate to the visible materiality of their presence. The instruments that generate the sound and image are in sight from start and throughout the performance and the processes involved are legible: everything is intelligible, can be broken down by the mind, it occurs like a visual and sound arithmetic whose complexity is neither the result of an intricate process that is hidden in the arcane of a "black box" but simply emerges from the interference between elementary processes, which are previously exposed to the public. The latter is at the heart of the system, an integral part of the projection. It operates like a transmutation whose general equation is this: matter, taken in a regular motion, produces time and space.

Nourished by the works of expanded cinema and minimal art of the 1960s, and collaborating for about twenty years, Julien Clauss and Olivier Perriquet have gradually made their practices of sound and image porous, the former being apprehended in its spatial dimensions, the latter for its musical qualities. Pursuing what touched them in the audio-visual practices of the 1960s - the direct relationship to the media, the apparent simplicity of the result, the contrast between the clarity of a situation or a mechanism and the emotion it arouses - and, lowering the "noise level" in the intelligibility of their instruments and their actions, small variations, micro-modulations, and ultimately each of their choices become apparent and important. The machines are designed to be used with hands, and therefore they assume the function of an instrument in their view.

In previous collaborations, their common referent was that of recorded music, where the instruments were designed to read the recordings (samples, films) and play them by arranging them using different principles of filtering, superimposition, masking, deformation etc. OOO is situated in a "before cinema", at a historical moment when cinema has not yet become an industry, when the projector, the cinema room, the ritual that accompanies each projection, have not yet standardized in a form that is denying space because it has become banal and always identical. Working on the contrary upstream of the production of these supports, OOO makes the very principle of a recording prior to a broadcast disappear. The mobile light sources replace the camera and produce an image whose diffusion is immediate, making the camera, the projector and the projection space coincide on the one hand, and the shooting and the projection on the other hand.

OOO is produced by iMAL.