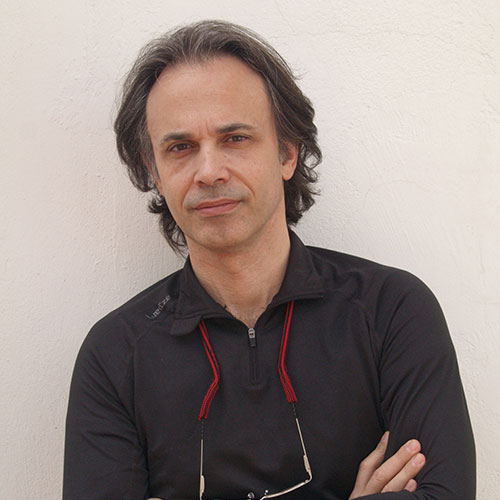 Ricardo Climent is Professor of Interactive Music Composition at University of Manchester, UK, where he serves as director of the NOVARS Research Centre and as head of Composition. For the last few years his research has focused on the potential of game-audio, physics and graphic engines for compositional purposes, using ‘the aural’ as the primary source for navigation and exploration. He previously held a lecturing position at SARC, (Sonic Arts Research Centre, Belfast), served as resident composer at the JOGV Orchestra, Spain; Conservatorio of Morelia in Mexico; Sonology – Kunitachi College of Music, Tokyo; LEA labs, at the Conservatorio of Valencia; the Cushendall Tower- In you we trust; Northern Ireland, at CARA- Celebrating Arts in rural Areas, cross-border Ireland, N.K. Berlin and at the Push Festival, Sweden.
Ricardo co-started collaborative projects, such as: The Microbial Ensemble, (microbial sonification project with Dr Quan Gan), The Carxofa Electric Band (a children’s workshop with vegetables and Electronics with Dr Iain McCurdy), The Tornado-Project (a cross-atlantic trio project with Esther Lamneck (clarinet) and Elizabeth McNutt (flute)), Drosophila (a dance-theatre tour of a blind fly with KLEM and Idoia Zabaleta), Ho- a sonic expedition to Vietnam, (a game-audio work), S.LOW, (a cross-disciplinary project in Berlin involving artists from 34 countries around the world), LocativeAudio Research Network (co-run by PG students at NOVARS), the Timbila Project ( with Miquel Bernat), CitizenUrge, (with DJ Slim Vic, Sweden), “[5]” -Valencia 1939, including geo-locative data, and “Putney” with Alena Mesarosova, Manuel Ferrer and Mark Pilkington and started the dutch-UK.network 58/58.
In terms of education, prior to completing a PhD in Electroacoustic Music Composition and a Master of Arts in the same area (both at The Queen’s University of Belfast), he obtained a five-year degree in Economics at University of Valencia, Spain and a 3-year degree by FUFAP, Alcala de Henares University (Madrid)/UPV.